‘Man Up’ on Domestic and Sexual Violence 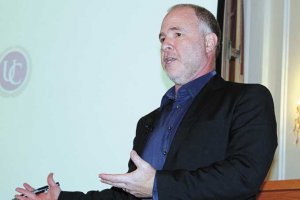 On March 14, FISA Foundation, Children’s Hospital of Pittsburgh and The Heinz Endowments co-sponsored “Man-Up: A Men’s Leadership Workshop on Gender Violence” with Jackson Katz.  Our goal was to start a new conversation in our region about why and how good men can be engaged in preventing other men’s violence against women and girls.

By Christian Morrow; Mar 19, 2014; New Pittsburgh Courier
As anyone who looks will notice, the majority of those working to end domestic violence are women. It makes sense because although men are sometime victims of women or other men, the bulk of domestic violence is perpetrated by men upon women.
So when the organizers of a recent forum featuring domestic violence expert Jackson Katz, PhD, filled a conference room at the Pittsburgh Club with 350 people, 250 of them men, they were pleasantly surprised.
In her welcoming remarks, Kristy Trautmann, executive director for the FISA Foundation, one of the sponsors, said she’d never seen an audience like that in 25 years.
“This is the beginning of a new conversation,” she said. “A conversation that says masculinity is about more than dominance and aggression.”
Others welcoming Katz and the attendees included Allegheny County Department of Human Services Director Marc Cherna, Pittsburgh Councilman Bruce Kraus and Mayor Bill Peduto.
Full article at: http://newpittsburghcourieronline.com/2014/03/19/man-up-on-domestic-violence/