History of the FISA Foundation

The mission of FISA Foundation is to build a culture of respect and improve the quality of life for three populations in southwestern Pennsylvania: women, girls, and people with disabilities. During our long history, beginning with roots planted in the early 1900s, our organization’s focus on these three populations has continually evolved to meet the changing needs of the community. 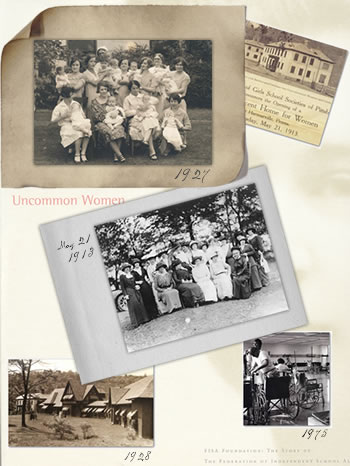 In 1911, alumnae of six girls’ college preparatory schools (Bishop Bowman, Dobbs, Farmington, Ogontz, Thurston-Gleim and Winchester) formed a membership organization known as the Federation of Girls’ School Societies, which was later renamed The Federation of Independent School Alumnae. Their intention was to improve the lives of poor and working class women. After carefully assessing the needs and opportunities, they founded Harmarville Convalescent Home for Women, which provided a safe haven for low income and unwed mothers to recover after childbirth or surgery. Women were served with care and without judgment about their life circumstances. Harmarville Convalescent Home had the lowest maternal and infant mortality rates in the nation.

Over time community needs changed and other safety nets became available. Rather than allow the facilities to fall into disuse, the Federation reassessed the needs and gaps in services. In 1956, the women refocused the mission on meeting the rehabilitation needs of people with disabilities by converting the convalescent home into Harmarville Rehabilitation Center. During the following decades, Harmarville became known internationally for its innovative therapies for people with physical disabilities.

In 1996, to meet the increasing challenges presented by managed care, the trustees of the Harmarville and the Federation decided to sell the Center to a for-profit company that was subsequently purchased by HealthSouth Corporation. As the founder and owner of Harmarville, the Federation received the proceeds of the sale and established the FISA Foundation to continue the legacy of charitable work. Although the acronym was chosen as a tribute to the Federation of Independent School Alumnae, “FISA” is the official, legal name of the Foundation. Today FISA Foundation is the largest grantmaking foundation in the country governed by women.

In 2001, FISA Foundation commissioned Mary Brignano to write Uncommon Women, a detailed account of our history. You may contact us to request a complimentary copy of this book.