FISA awarded a grant to the Women’s Law Project to support Pittsburgh Public Schools in continuing to address Title IX inequities that were identified in a school board-commissioned audit of district sports programs. The success of this grant resulted from a combination of individual advocacy and policy change, along with Pittsburgh Public Schools’ commitment to being fair and inclusive.

A fourth grader named Charlotte sought assistance from Women’s Law Project (WLP) after the girls’ basketball team in her elementary school was cut.  Sue Frietsche, an attorney at WLP, provided significant assistance to Charlotte as she se 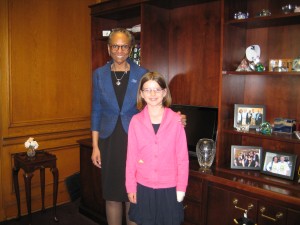 cured a meeting with superintendent Linda Lane to discuss her grievance.  As a result of that meeting, and the ongoing advocacy of Women’s Law Project, Dr. Lane reinstated the team AND issued a district-wide directive to elementary schools requiring gender equity in all sports programming as well as expanded efforts to recruit and support female athletes.

When implementation of this forward-thinking edict was challenged by budget constraints, WLP continued to work with Pittsburgh Public Schools to broker a realistic solution.  This winter, PPS created a new elementary school girls basketball league.  Fourteen of the sixteen eligible schools have fielded girls’ teams. One of those teams had 44 girls try out for 16 slots! The league played its first game of the season early in February. Charlotte and all the members of her Linden team played a great game against the Faison team.  Final score: Linden 1, Faison 5.  All of the girls won.

The successes this year hold promise for the reform of athletic programs of upper grades as well.