Not one. Where is our Humanity?

It was 90 degrees today and I have a chill I can’t shake.
The body camera footage from the officers who first engaged with George Floyd was released this afternoon.  I learned that the two first responding officers were rookies, inexperienced.  They were responding to a report of an attempt to pass a counterfeit $20 bill. 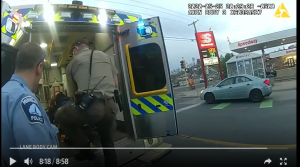 They walked across the street to where George Floyd was sitting quietly in his car.  They banged on the window and started issuing orders without saying why they had approached him.  Within 20 seconds, one of the officers pulled a gun and pointed it at Mr. Floyd.
Throughout, George Floyd apologized, almost reflexively. He tried to pacify.  More than once he said, “I’m gonna die, I don’t want to die.”   The next part of the video is horrifyingly familiar.
***
Earlier today I listed to a recording of Krista Tippett interviewing author Isabel Wilkerson: “In 1920, Black people were lynched every other day in America.  Today, a Black person is killed by a police officer every 3-4 days.”
***
The last part of the body cam video haunts me. Paramedics arrived after Floyd has lost consciousness.  He was still on the ground, with a knee on his neck.  He was transferred to a backboard, a stretcher, loaded onto an ambulance.
It was two and a half minutes before CPR was attempted.
Not one of the first responders, the “helpers” we are counseled to look for in emergencies, made any real attempt to intervene, nor to administer lifesaving measures.
Not one.
It was a lynching.