Don’t get me started; I can talk forever about the cute things my daughter said and did when she was small:

She’s in middle school now.  Her jokes have become more sophisticated, and she spends too much time playing with her phone.  She and her friends travel in packs, banding themselves together with music, memes, inside jokes and references that are indecipherable to adults. She is often oblivious to personal space. She is trying on grown up things, but innocence still clings.  She still loves playing hide and seek, and a pile of dollar-store flashlights can produce hours of fun in the dark basement or the backyard.
She may be taller than me, but she’s still a kid, and the adults in her world treat her accordingly. It’s painful to admit this, but my Black friends cannot say the same for their children and grandchildren; the world does not presume that their sweet kiddos are goofballs, alternating between playfulness and mock-sophistication. My daughter, with rosy skin and sandy hair is automatically granted allowances by adults for the innocence and immaturity of youth. But children with black and brown skin are treated differently for behaving in exactly the same ways.
Adults tend to mis-perceive Black children as older than they actually are, which changes everything. This thought-error is so common it has a name: “adultification.” It means attributing adult knowledge and intent to children, and then judging their behavior by those adult standards. The effects of adultification are profound. 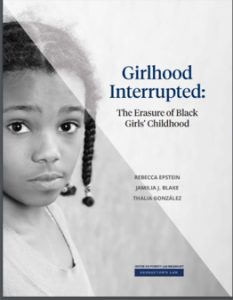 According to Girlhood Interrupted, a report issued by The Georgetown Law Center on Poverty and Inequality, when compared to white girls of the same age, adults perceive that Black girls need less nurturing, less protection, less support, and less comfort.  Black girls are also perceived to know more about adult topics, including sex.
Can you see where this leads?  It’s age and developmentally appropriate for young girls to learn about boundaries with peers and adults by trial and error, asking questions, making pronouncements, mimicking adult talk and behavior, having and getting over feelings, and experiencing the consequences. But the world responds differently to them based on the color of their skin. When assumptions of maturity are projected onto Black girls, their behavior is interpreted as bossy, loud, brash, sexualized, and sometimes threatening.  They are punished more harshly and with more force.  Nationally, Black girls are twice as likely as white girls to be disciplined for minor and somewhat subjective violations like dress code violations, disrespect, disobedience.
You may have seen the video circulating recently of a six-year-old girl being arrested at school in Orlando, her wrists zip-tied together since her wrists were too small for handcuffs and forced into the back of a police car, while shrieking and sobbing.  Her offense? Throwing a tantrum. While the officer was fired and the charges were dropped, this child will forever remember being interrupted from reading a book with her teacher by a police officer who treated her as a criminal, while many adults in her school did nothing to stop it.  Far too many children of color have had that experience.
This makes me feel sad, angry, a bit overwhelmed.  It would be easy to turn away, retreat into the bubble of my daughter’s experience. But I can’t, knowing that black and brown girls are just as innocent, just as deserving of celebration and a bit of guidance as my daughter.
We can make our world a bit fairer for kids if, when we encounter a young person and find ourselves annoyed or angered by their behavior, we ask ourselves: How old do I think this child is?  And: Am I presuming maturity and ill intent, or am I granting this child some grace by presuming youth and innocence?
+++
This video explores more about Adultification bias: