I was working at a rape crisis center in the early 2000’s, when the field of prevention was in its infancy.  I knew in my bones that the risk reduction strategies being sold to women (go out in groups, carry your keys, look in the backseat before you get into a car) had almost no chance of preventing someone from being raped.  Most assaults take place at home, and most perpetrators are known (acquaintances, friends, or partners) not strangers.
It was a new concept then to enlist men as allies in preventing violence against women.  And, frankly, I thought it was a completely hopeless, almost laughable strategy.  Harsh, but true.
I was wrong.
Fast-forward fifteen years.  I was working at FISA Foundation and the field of prevention had come a long way. We took a leap of faith and departed from our history of funding shelters and services for women and girls to try a new tactic.  Knowing that most sexual and domestic violence is committed by men, we decided to address the violence at its source—with men and boys—and  invested in Coaching Boys Into Men (CBIM), an evidenced-based  program to enlist athletic coaches in talking to their male high school athletes about relationships and respect.  The research showed that boys who completed the program were more likely to intervene if their buddies crossed a line into abusive behavior, and less likely to be sexually abusive themselves.  The research spoke for itself — it was like a holy grail. But implementing CBIM was a lot harder than we expected. It took a long time to convince schools to participate, and it took a lot of encouragement to help coaches stick with the program when they encountered topics that made them feel uncomfortable.  For the last five years we’ve partnered with United Way of Southwestern PA, many other local funders, agencies like Pittsburgh Action Against Rape and Domestic Violence Services of SWPA, pro sports teams and schools. Our goal is to have Coaching Boys Into Men in every school.  We’re not there yet, but our region has the largest implementation in the country, reaching thousands of boys.
This program changes lives.  Many of the coaches (even the ones that had to be strong-armed into doing it) say it’s the best thing they have ever done.  For instance, Jonathan LeDonne, head coach of the Penn Hills High School Indians, says that he’s seen changes in his football players, and those changes rub off on other students. “When I am around athletes and non-athletes, I see a standard that wasn’t there before,” he remarks. “How they are acting, what they are saying, what they are doing, is definitely more positive. Teammates are more willing to call each other out and hold each other accountable than before.”
When asked what CBIM had taught him about consent, a high school quarterback said, “Consent is getting permission.  You have to get permission for a lot of things: borrowing the car, staying out late, and you have to get permission to touch someone or be intimate with them.  It’s no different.” 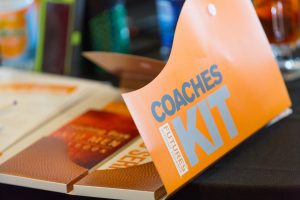 For years now, high school principals, college presidents, teachers and others have told us that we have to start even earlier: by high school, kids already think they know a lot about relationships. Today, Dr. Elizabeth Miller and her team of researchers at UPMC Children’s Hospital of Pittsburgh announced the results of a study to test the effectiveness of Coaching Boys Into Men in middle schools.  The results are stunning:

I was once a skeptic.  Then I was converted by our experience of Coaching Boys Into Men in high schools.  Today I am deeply moved that we have a very real, practical opportunity to stop abuse before it happens, if we start with 12-14 year olds. Given that nationally 1 in 3 teens experiences some form of abuse in a dating relationship, Coaching Boys Into Men is the closest thing we have to a preventative silver bullet. I’m in.  Are you?  Please share information about CBIM with your school district and encourage administrators to call 211 or contact United Way to request the program.
+++
To learn more about the Coaching Boys Into Men program, which schools are implementing it, and what coaches say about it, see the Southwest PA Says No More website.
For more details about the Coaching Boys Into Men research, view the press release.
Read the research about Coaching Boys Into Men in middle school: Miller E, Jones KA, Ripper L, Paglisotti T, Mulbah P, Abebe KZ. An Athletic Coach–Delivered Middle School Gender Violence Prevention Program: A Cluster Randomized Clinical Trial. JAMA Pediatr. Published online January 13, 2020. doi:10.1001/jamapediatrics.2019.5217