ADA 30 Timeline of Local Efforts to Increase Access and Inclusion

Timeline of Local Efforts to Increase Access and Inclusion

1957 Open Doors for the Handicapped is founded in Pittsburgh with the mission of creating transportation access in Pennsylvania. The group developed the first paratransit (shared ride) agency in the nation managed by individuals with disabilities. The group had 13 chapters across Pennsylvania.

1966 Mental Health/Mental Retardation Act allocates funds for community living and services, and sets the stage for the end of institutionalization. 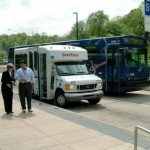 1972 PA Association for Retarded Citizens (PARC) vs. Commonwealth of Pennsylvania pursued the right to education for students with intellectual disability. The PARC Consent Decree laid the foundation for federal Public Law 94-142, Education for All Handicapped Children Act of 1975 — later named “Individuals with Disabilities Education Act” (IDEA).

1973  Section 504 of the Rehabilitation Act of 1973 makes it illegal for federal agencies, public universities, and other public institutions receiving any federal funds to discriminate on the basis of disability.

1978  The Port Authority of Allegheny County establishes the Committee for Accessible Transportation to assist with the planning and implementing of a paratransit service for people with disabilities. The collaborative between the disability community, Port Authority, private transportation providers, Carnegie Mellon and others resulted in a unique system design, still considered a national model. Launched in 1979, ACCESS is one of the most successful shared ride services in the nation. In 2014, ACCESS provided 593,000 trips for people with disabilities out of total ACCESS ridership of 1.6 million.

1978  Mayor Richard Caligiuri forms the Committee on Architectural Barriers following the passage of the federal Architectural Barriers Act of 1968, which mandated that that all buildings designed, constructed, altered or leased with federal funds be made accessible. Installing curb cuts in Downtown Pittsburgh was one of the committee’s first projects.

1984  The federal Voting Accessibility for the Elderly and Handicapped Act passed. It mandates that polling places remove physical barriers to accessibility. Currently, all but three of Allegheny County’s 1321 polling locations have accessible entries, compared with 248 inaccessible polling places in 2005.

1988  Amendments to the federal Fair Housing Amendments Act require that a certain number of accessible housing units be created in all new multi-family housing. The act covers all buildings, not only those in receipt of federal funding. 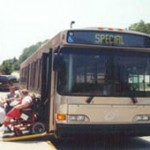 1994  Founding of the City of Pittsburgh-Allegheny County Task Force on Disabilities, a 13-member body that advises the City and County on issues that improve the quality of life for people with disabilities.

1996  The federal Telecommunications Act requires that computers, telephones, closed captioning, and other telecommunication devices and equipment be made accessible.

1997  Three Rivers Center for Independent Living files a lawsuit against City for failure to comply with the ADA by not installing curb cuts on newly repaved streets. The lawsuit was settled in 1999, with the City agreeing to a three-year timeframe for installing curb cuts that should have been done since 1992.

1998  City of Pittsburgh and Allegheny County launch Disability Agenda 2000 process to recommend policies that will bring about the highest quality of life, equal opportunity and effective participation in community life for people with disabilities.

2001  County establishes Mental Health Court, which addresses issues related to people with mental health disabilities by placement in mental health services rather than incarceration when faced with non-violent criminal charges.

2001  Opening of PNC Park, widely recognized as the most accessible Major League facility in the nation. The local disability community also provided guidance on accessibility planning for Heinz Field (2001) and Consol Energy Center (2010).

2002  Efforts begin to increase access at the Three Rivers Arts Festival, such as wheelchairs on loan, improved signage, maps of accessible parking lots, interpreters at performances and accessible portable toilets.

2002 The federal Help America Vote Act requires that at least one voting machine at designated polling locations be accessible to people with disabilities.

2002  The Hospital Council of Western Pennsylvania and its partners design and implement “Every Contact Counts,” the first local program to educate hospital employees about the support needs of people with disabilities. Trainings presented in 10 hospitals.

2004  Urban League, Community College of Allegheny County, Three Rivers Center for Independent Living, and the City of Pittsburgh are the first to sign pledges to employ people with disabilities.

2005  Allegheny County establishes Disability Connection office to coordinate efforts to improve services to all people with disabilities and elevate issues of quality of life, equal opportunity and effective participation in the community.

2008  In conjunction with the 250th anniversary of the City of Pittsburgh, Allegheny County Disability Connection office produces “Voices of Our Region,” a multimedia project documenting the history of local people with disabilities.

2009  Disability Rights Network of Pennsylvania files class action lawsuit against Commonwealth of Pennsylvania on behalf of more than 1200 residents of five state-run institutions who had not been offered the opportunity to move into community living arrangements.

2010  “21 and Able” project launched by United Way of Southwestern Pennsylvania to advocate for needs of young people with disabilities as they transition to adulthood. The #IWantToWork campaign and other initiatives boost numbers of young adults with disabilities in local workforce. Two conferences – “From Wrongs to Rights” (2013)  and “From Rights to Action”(2014) – convene young self-advocates to learn about disability rights history and their role as new generation of advocate

2010  County Executive Dan Onorato established the Allegheny 365 committee to ensure that all individuals, including those living with disabilities, can engage fully in the county services. Recommendations from the Committee were issued in 2012.

2015  Pittsburgh and Allegheny County’s year-long celebration of 25th anniversary of the Americans with Disabilities Act.

2015 National Council on Disability holds quarterly meeting at University of Pittsburgh and honors former Pennsylvania Governor and U.S. Attorney General Dick Thornburgh for his efforts to enact the Americans with Disabilities Act, celebrating its 25th anniversary in 2015.

2015  Western Pennsylvania Disability History and Action Consortium founded to preserve and honor the historic struggle of people with disabilities to attain human and civil rights and to share the lived experiences of today, in order to promote community access, participation and equal opportunity. 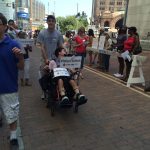 2016  #IWantToWork United Way initiative successfully campaigns for Pennsylvania’s Work Experience For High School Students with Disabilities (Act 26) which ensures services with the Office of Vocational Rehabilitation and transparent county data on transition to competitive, integrated employment for students with disabilities.