From May through August 2015, the City of Pittsburgh and Allegheny County will celebrate the 25th Anniversary of the Americans with Disabilities Act (ADA) with a series of community-wide events recognizing the landmark law that has transformed lives by removing barriers to civic participation, housing, transportation, employment, arts and recreation, education and more.

The Pittsburgh/Allegheny County ADA 25th Anniversary Celebration is one of several scheduled throughout the nation this year, including a major celebration in Washington D.C. on the July 26 anniversary with attendance expected to be in the thousands.

The Pittsburgh/Allegheny County ADA 25th Anniversary celebration will highlight local accomplishments and champions, as well as next steps for our community. Like most of the nation, as many as 18 to 20 percent of City and County residents of all ages have some type of disability.

The key messages of the anniversary celebration are:

• The ADA is the most important civil rights legislation of the past 25 years. It has transformed the lives of individuals with disabilities, their families, and the community.
• Accessibility and inclusion benefit everyone in the community.
• A disability-friendly community addresses the spirit of the ADA, not just the letter of the law.
• An inclusive community champions diversity of all kinds, including differing abilities.
• Universal design concepts and advanced technology hold promise for increasing access and inclusion for everyone.
• The ADA encompasses more than just physical access (e.g. wheelchair ramps) – it promotes accommodation for a wide range of disabilities in a variety of settings.
• Although the ADA has created a more inclusive American society, significant inequities remain, especially in employment. People with disabilities who can and want to work continue to face barriers. 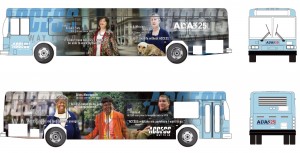 Port Authority of Allegheny County buses “wrapped” in the ADA 25th anniversary logo will • A short summary of the Americans with Disabilities Act (ADA) of 1990 circulate throughout the city and county through the end of 2015. These buses are a visible reminder that accessible public transportation is one of the major accomplishments of the ADA, and that the Port Authority of Allegheny County is recognized as a national leader. The ACCESS paratransit system for people with disabilities is considered one of the most successful in the nation

October 6
ABILITY Expo “My Disability is One Part of Who I Am”
11 am – 3 pm
Rodef Shalom
4905 Fifth Avenue
Pittsburgh, PA 15213
Free resource fair sponsored by Pennsylvania Office of Vocational Rehabilitation and Volunteers of America in conjunction with National Disability Employment Awareness Month. For information, contact Sarah Vogel 412-392-5973 or Brett Glavey 412-209-4416.

October 15
Voices of our Region7-9 pm
William Pitt Union Ballroom
Musical performance by Pittsburgh-native Shailen Abram followed by a screening of local videographer Tony Buba’s documentary entitled, “Voices of Our Region.” Mr. Buba will discuss highlights of his documentary and entertain questions from the audience. 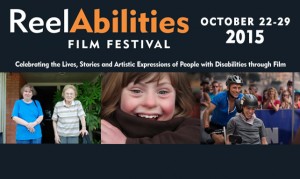 All films will be presented with open captions, audio description and ASL interpretation. The festival venue, Rodef Shalom Congregation, is fully accessible. Tickets can be purchased and additional information on the post-film programs and speakers can be found at JFilmPgh.org.

“On Beauty” follows former fashion photographer Rick Guidotti, who after 15 years of working for clients such as Yves Saint Laurent, Elle, and Harpers Bazaar, grew tired of seeing the same ideal of beauty “spit up at us constantly.” In a moment of serendipity, Rick walked by a young woman with Albinism (a genetic condition that results in loss of pigmentation in the hair and eyes) at a New York City bus stop, and wondered why she wasn’t considered beautiful in his other world. This exploration resulted in a show-stopping magazine spread for Life Magazine.

Followed by a conversation with photographer Rick Guidotti.

Jazz legend Rahsaan Roland Kirk was known for playing multiple instruments at once and for his comical and political interjections on stage, creating music about his experience of becoming blind as an infant. Through communicating sonically with his surroundings, Kirk developed a unique ability to see in music, as everyday items were re-imagined as instruments and each seemingly insignificant noise revealed its own rhythm and cadence. A child prodigy, adult visionary, and political activist, Kirk played music until the day he died.

Followed by a jazz concert with Roger Humphries, who played with Roland Kirk in the 1970s.

For 64 years, 92-year-old Mimi has cared for her daughter Dona, who has an intellectual disability. This poignant, heartbreaking and, at times, humorous documentary traces the process of Mimi grappling with the notion that she will not outlive her daughter. The film spotlights the challenges of aging caregivers of people with intellectual and developmental disabilities and details the ripple effects it has on three generations of a Texas family.
Followed by a conversation with the film’s director Sophie Sartain and Bob Nelkin, President and Chief Professional Officer, United Way of Allegheny County.

Sponsored by the Jewish Healthcare Foundation.

Rory Culkin delivers an electrifying performance as Gabriel, a vulnerable and confused teenager longing for stability and happiness amidst an ongoing struggle with mental illness. Convinced that reuniting with his old girlfriend holds the answer to all his troubles, Gabriel risks it all in a desperate and increasingly obsessive pursuit, testing the limits of his compassionate family as his inner demons begin to close in around him. (Age 15+)
Followed by a conversation with the film’s director Lou Howe, Dr. Ken Thompson, self-advocate Lee Moses, and Pittsburgh Police officer Krista Hoebel.

Sponsored by the Staunton Farm Foundation.

At 17-years-old, Julien has a great sense of humor, loads of charm, and cerebral palsy. In a bid to bond, Julien challenges his father to participate with him in the Ironman race, a triathlon in which his father has previously competed. Doing the race alone is an incredible challenge, but completing it together with Julien would be nearly impossible. Still, his father agrees and the two set out to train for and compete in one of the most intense races on earth. “The Finishers” is a moving portrait of the love between a father and his son.

Followed by a conversation with 2014 Paralympic Gold Medalist Dan McCoy and his father, Mark.

RECEPTIONS
All screenings will be followed by receptions including vegan, Kosher, and gluten-free options.

PHOTOGRAPHY EXHIBIT
A photography exhibit featuring work by Rick Guidotti and Martha Rial will be displayed in the Rodef Shalom commons area from October 22 – 29.

October 27
Dick Thornburgh Forum for Law and Public Policy
1:00 pm
University Club (Ballroom A)
Mark Johnson, Chair of the Legacy Project and Director of Disability Advocacy at Shepherd Center in Atlanta has accepted Governor and Mrs. Thornburgh’s invitation to serve as a guest lecturer.  This will be the second lecture in this series this calendar year in celebration of the 25th anniversary of the signing of the Americans with Disabilities Act. Logistics and public relations will be handled by Kim Carson at the Dick Thornburgh Forum for Law and Public Policy: Kimberly Carson (kac15@pitt.edu). More information to follow at this link https://www.thornburghforum.pitt.edu/node/455.

The summit aims to bring together employers, related government agencies, service providers, and people with disabilities to discuss challenges, opportunities, case studies of programs of excellence, advancements in adaptive technology, supports, suggestions for systems improvements, and other important topics. This year will feature two events: October 27, 2015, at the Wyndham Grand Downtown in Pittsburgh and November 13, 2015, at Eden Resort & Suites in Lancaster. There will be guest speakers, breakout sessions, a job fair, and much more. Registration will continue through October 13.

Follow the ADA 25th Anniversary on Twitter @ADApgh and look for hashtag #ADA25pgh to see what is trending.