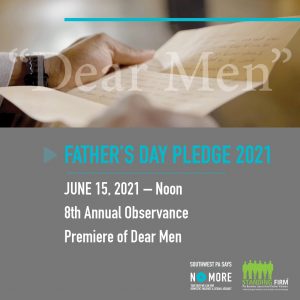 For its first virtual Father’s Day Pledge observance on June 15, Southwest Pa Says No More will debut “Dear Men,” a powerful series of videos to shed light on the importance of men taking action to address a serious issue affecting as many as one in three women.
In the series – one six-minute and four two-minute videos – eleven local men read letters from survivors, recounting abuse they experienced and an action a man took that made a difference to her at the time, whether he knew it or not. The men are visibly moved by the letters, based on actual stories.

Father’s Day Pledge 2021 will include brief remarks and the recitation of the Pledge with local leaders. The public is invited to join on Zoom at noon, June 15. Register here: