FISA Foundation has been funding the ACLU of PA, in conjunction with the Black Girls Equity Alliance, to address the disproportionate negative consequences of school policing on Black girls and Black youth with disabilities. 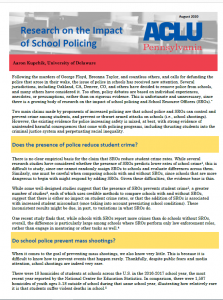 Following the murders of George Floyd, Breonna Taylor, and countless others, and calls for defunding the police that arose in their wake, the issue of police in schools has received new attention. Several jurisdictions, including Oakland, CA, Denver, CO, and others have decided to remove police from schools, and many others have considered it. Too often, policy debates are based on individual experiences, anecdotes, or presumptions, rather than on rigorous evidence. This is unfortunate and unnecessary, since there is a growing body of research on the impact of school policing and School Resource Officers (SROs).*

And it goes on to address the following questions:

The research summary was authored by Aaron Kupchick, Professor of Sociology, University of Delaware.